Since everyone loves to read about code coverage, we figured we’d describe how we implemented it for a language only 97.3% as popular as JavaScript: OCaml! No matter how functional our approach to implementing Ketrew, our eDSL for managing workflows, at the end of the day the program needs to manage state. From that perspective, code coverage helps you to be sure that you’ve tested all the ways you manage that state, and probably more importantly what paths you’ve implemented but haven’t tested.

We considered a couple of options when trying to implement code coverage for OCaml.

For demonstration if we have example.ml with

(Remember that when camlp4 is asked to pipe output it returns the binary OCaml AST representation needed by the compiler) will create:

Of course, it is important to be able to control the instrumentation so that production versions do not have this book-keeping. Therefore, we’d like to integrate this capability with our current build tool.

Oasis’s strengths lie in its ability to succinctly represent what you’re trying to build in a way that understands OCaml. If you want to build a library, add a library section; if you want an executable, add an executable section; if you want a test, etc. Oasis does a good job of exposing the appropriate options (such as dependencies, filenames, install flags) for building each of these things, but it is not flexible in how to build these things. Let’s get to the details.

Add a Flag section to the _oasis file to allow you to optionally instrument code:

Unfortunately using this flag in the _oasis file to logically represent two compilation paths is almost impossible. For example, we cannot use BuildDepends.

throws up an error: Exception: Failure "Field 'BuildDepends' cannot be conditional". One could create separate build targets for instrumented executables because the Build flag is conditional. But then you would have to duplicate the build chain for all of your intermediary steps, such as libraries, by adding instrumented versions of those. But even if you were successful at that, passing the preprocessing arguments to Ocamlbuild via the XOCamlbuildExtraArgs is settable only in the project scope and you have to pass different arguments to different targets (Library vs Executable).

So for now, add the Flag section: this lets you configure your project with coverage via ocaml setup.ml -configure --enable-coverage by modifying the setup.data text file that is used during compilation.

To perform the instrumentation we’ll drop down a layer into the OCaml build chain.

Oasis uses OCamlbuild for the heavy lifting. Besides knowing how to build OCaml programs well and performing it ‘hygienically’ in a separate _build directory, OCamlbuild is also highly configurable with a _tags file and a plugin mechanism via myocamlbuild.ml that supports a rich API. One can write custom OCaml code to execute and determine options; exactly what we need.

We can add some targets to our Makefile to generate reports:

Running against a basic test we get output such as: 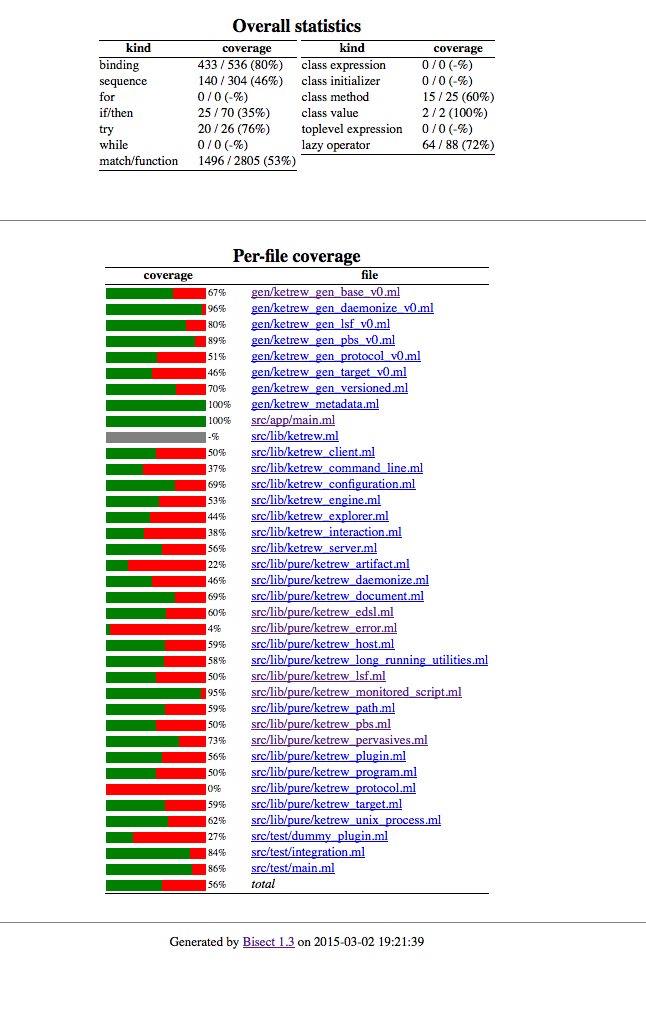